Last week I received a letter from the Archbishop to promote and invite all our congregations to attend the “Rally for Life” on Sunday 15 September.

Glenn Davies writes “[t]he Bill before the Legislative Council, misleadingly entitled the Reproductive Health Reform Bill 2019, will in its current form do great damage to our society in the legalisation of the death of innocent lives in the womb. While abortion is currently lawful in NSW, despite the ignorant protestations of some, the protective measures instituted by the District Court ruling in 1971 have been completely abandoned for abortions up to 5 months of pregnancy. While there is merit in decriminalising abortion in certain circumstances, this Bill will permit abortion on demand, whether it be for a mother’s financial circumstances or her desire for a girl rather than a boy.”

On speaking to Archbishop Davies, it is clear that he truly believes that the place for the private and quiet Christian is now over. Today there are strong currents looking to move Australian society to a place which is clearly ungodly and not for the best for all peoples – especially “the most vulnerable and most voiceless in our society, the image bearers of God in utero.”

Again, Glenn writes, “It is probably not since the days of Archbishop Howard Mowll that Sydney Anglicans were invited to join a public demonstration of their faith in this way. In the 1940s, the Archbishop invited every member of the Anglican Church to take part in the Procession of Witness on Good Friday. This was a march from the domain to the Cathedral, in protest of the opening of the Royal Easter Show on Good Friday. Our protest is arguably more significant …”

May I commend the rally to your prayers and please consider attending. There will be the usual 3rd Sunday BBQ Lunch after church and then we will travel by train after the 10am service. 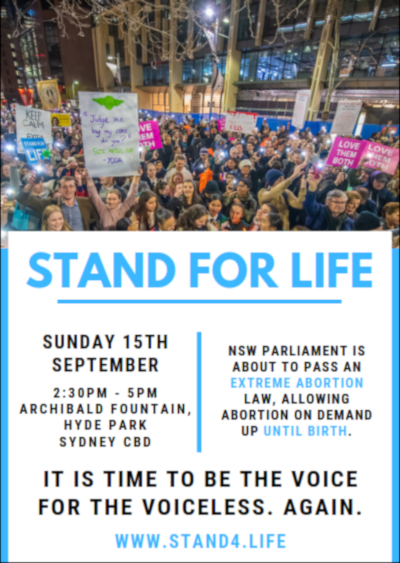 Loves Jesus and loves telling people about Him.